The Turquoise Guitar by Jolene Bird 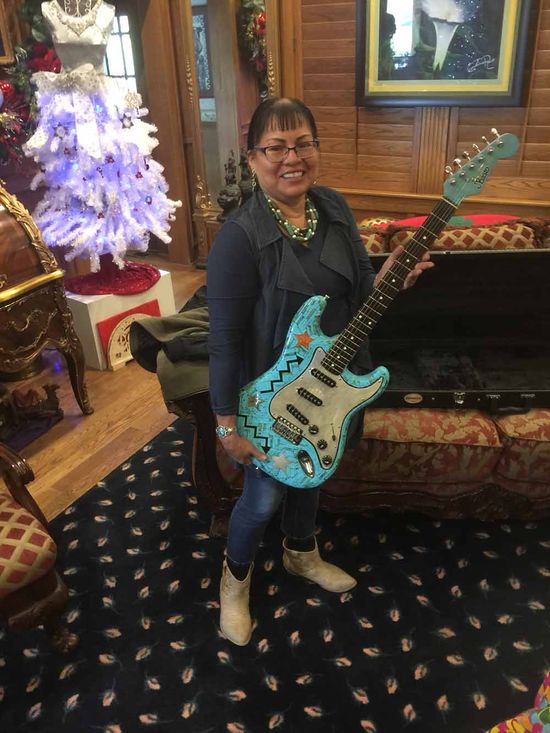 This is a Fender Stratocaster guitar onto which Jolene has attached pieces of Kingman and Sonoran Turquoise highlighted with Jet. The stars are in Abalone, Mother of Pearl, Pipestone, Yellow Serpentine, and Spiny Oyster. The artistry in this piece is simply breathtaking and has to be seen to be believed. Consider that this is a three dimensional mosaic, a three dimensional jigsaw puzzle if you will. Jolene told me that each individual piece of turquoise had to be cut, shaped, and ground down to fit perfectly with the other pieces. Each individual piece probably took six to eight hours to produce and there are literally hundreds of pieces covering the guitar. 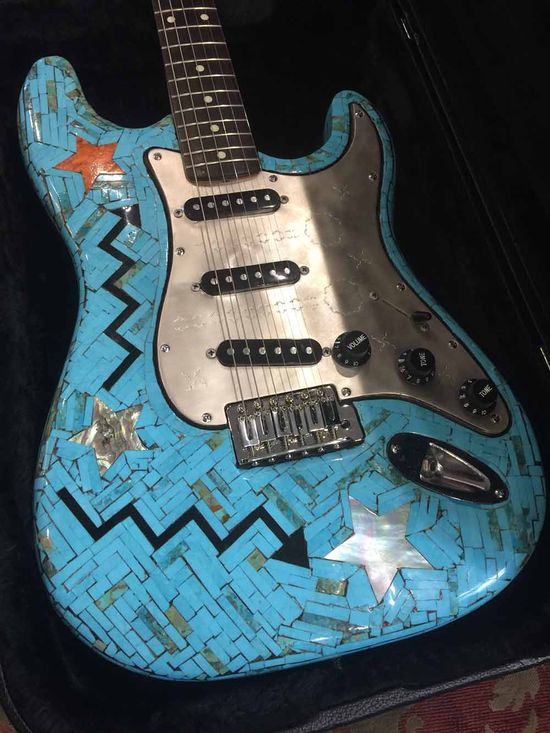 Jolene Bird and her son Charles drove 12 hours from Santo Domingo, New Mexico to visit me on November 5, 2018 and show me the piece of tuquoise inlay work that she has been working on for the past two-and-a-half years. This is a Fender Stratocaster guitar onto which Jolene has attached pieces of Kingman and Sonoran Turquoise highlighted with Jet. The stars are in Abalone, Mother of Pearl, Pipestone, Yellow Serpentine, and Spiny Oyster. The artistry in this piece is simply breathtaking and has to be seen to be believed.

The reverse side is as beautiful and intricate as the front.

Dr. Pickens never saw this creation, but she did know that Jolene was working on it. The last time Jolene visited with my wife she told my wife that she was working on the guitar and my wife told her she wanted to see it and purchase it when it was finished. Dr. Pickens already had dozens of Jolene's other pieces in her collection and was very familiar with her work.

I have no doubt that if this piece were at Santa Fe Indian Market, it would have taken first prize. It will have a place of honor in Dr. Pickens Museum.

I was talking to Jolene about an artist and immortality. Isabella Russell-Ides says in her play "Lydie Marland in the Afterlife" that you don't really die until your name is spoken for the last time and you are remembered by someone that knew you or knew of you for the last time. I told Jolene that 100 years from now, people will be looking at this masterpiece with her name on it in Dr. Pickens Museum and that her great-great-grandchildren will come and say that one of their ancestors created this work of art. That is immortality for an artist.

Thank you Jolene for creating this work of art.