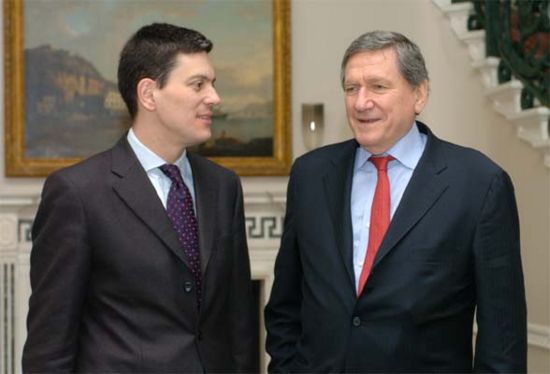 Caption: British Foreign Secretary David Miliband meeting Richard Holbrooke, President Obama's Special Representative for Afghanistan and Pakistan in London, 5 February 2009. They had a substantive discussion about the security and stability of Afghanistan and Pakistan, which remains of the greatest importance to the interests of our two countries. Flickr Creative Commons Attribution-No Derivative Works 2.0 Generic[1]

Holbrooke graduated from from Brown University in 1962

Holbrooke began his foreign service career in 1962.[2] After studying Vietnamese, Holbrooke was sent to Vietnam and, in the following six years served in a variety of posts related to Vietnam -- first in the Mekong Delta as a provincial representative for the Agency for International Development (AID), and then as staff assistant to Ambassadors Maxwell Taylor and Henry Cabot Lodge.[2]

In 1966 Holbrooke was re-assigned to the White House, working on the Vietnam staff of President Johnson.[2] In 1967-69, Holbrooke wrote one volume of the Pentagon Papers, served as a special assistant to Under Secretaries of State Nicholas deb.[2] Katzenbach and Elliot Richardson, and simultaneously served as a member of the American Delegation to the Paris Peace Talks on Vietnam, headed successively by Averell Harriman and Henry Cabot Lodge.[2]

Following these assignments Ambassador Holbrooke spent a year as a fellow at the Woodrow Wilson School at Princeton University.[2]

In 1970 Holbrooke was assigned as Peace Corps Director in Morocco.[2]

In 1972, Holbrooke resigned from the Foreign Service to become Managing Editor of the quarterly magazine Foreign Policy, a position he held until 1976.[2] During 1974-75 he also served as a consultant to the President's Commission on the Organization of the Government for the Conduct of Foreign Policy, and was a contributing editor of Newsweek magazine.[2]

In 1977, President Carter appointed him Assistant Secretary of State for East Asian and Pacific Affairs, a post he held until 1981.[2] During his tenure, among other major events, the United States established full diplomatic relations with China.[2] Holbrooke is the only person to have held the Assistant Secretary of State position for two different regions of the world.[2]

Holbrooke was U.S. Assistant Secretary of State for European and Canadian Affairs from 1994 through 1996, during which time he led the Bosnian peace talks, which resulted in the Dayton Peace Accords.[2] Prior to becoming Assistant Secretary of State, he was U.S. Ambassador to Germany.[2] He is currently responsible for business development in Europe and the Far East for Credit Suisse First Boston.[2] Holbrooke also acts as President Clinton's special envoy to Cyprus, and consults with the White House on foreign policy issues.[2]

Special Envoy to Aghanistan and Pakistan

On January 22, 2009 the State Department announced the appointment of Richard Holbrooke as Special Representative for Afghanistan and Pakistan.[3] Secretary of State Hillary Clinton praised Holbrooke: "Today, you will see an example of the kind of robust diplomacy that the President intends to pursue and that I am honored to help him fulfill. Nowhere is there a need for a vigorous diplomatic approach more apparent than in the two regions that epitomize the nuance and complexity of our interconnected world. Many of you in this building, many of your Foreign Service and Civil Service and Foreign National colleagues have been engaged on behalf of issues related to the Middle East and to Afghanistan and Pakistan for years, sometimes, as we know, at great peril and personal sacrifice. That work has been invaluable, and it will continue to be the underpinning of everything our government does to achieve peace and stability in these regions."[3]

Initial Reaction from Afghanistan and Pakistan

On February 2, 2009 the LA Times reported that officials in Afghanistan, Pakistan and India have reacted uneasily to the appointment of Richard Holbrooke as Special Envoy.[4] Holbrooke has declared recetly that the government of Afghan President Hamid Karzai, a longtime American ally, has failed.[4] In opinion columns, he has pointed to "massive, officially sanctioned corruption," along with drugs, as the country's most severe problems. Holbrooke has also called for vigorous action to deal with extremist sanctuaries in Pakistan. He charged that Pakistan has the power to destabilize its neighbor Afghanistan, "and has."[4]

On February 9, 2009 Jodi Kantor of the New York Times conducted an interview with Secretary of State in which she talked about Special Envoy Richard Holbrooke and his role in Pakistan and Afghanistan.[5] "You know, at his introduction ceremony, both the President and I emphasized that nowhere is the need for a vigorous diplomatic approach more apparent than in the two regions that epitomize the nuance and complexity of our interconnected world than the Middle East and Afghanistan and Pakistan. Richard represents the kind of robust, persistent, determined diplomacy that the President intends to pursue, and that I'm honored to help him fulfill. And when I think about what we're facing in Afghanistan and Pakistan, I believed that, you know, Richard brought a lifetime of experience. He's passionate about securing peace in situations where it does not exist. He has seen the cost of conflict in terms of human lives with his own eyes going back to the early 1960s in Vietnam. He is single-minded in his desire to make the world a more peaceful place. And I know from many, many hours of conversation, going back many years, that he has a preexisting concern for Afghanistan. As a young diplomat, he traveled through Afghanistan. During the last eight years as he pursued his many interests, and particularly his work on behalf of the Asia Society, he returned to Afghanistan and Pakistan and the neighbors. And the best way to know how somebody will handle a difficult situation is to look at what they've done in the past. And I've known of Richard Holbrooke for decades. I watched him up-close in the Clinton Administration. I admire deeply his ability to shoulder the most vexing and difficult challenges. And he does bring relentless focus and energy. He can wear you out, but it is necessary to keep everybody, you know, on point about what we're trying to achieve."[5]

Ambassador Holbrooke is a member of the International Institute of Strategic Studies, the Citizens Committee for New York City, and the Economic Club of New York.[2] Prior to assuming his current post, he was a Director of the Council on Foreign Relations, the America-China Society, the National Committee on U.S.-China Relations, and the International Rescue Committee. He is Chairman of the American Academy in Berlin.[2]

Holbrooke is co-author of Counsel to the President, the memoirs of Clark Clifford, as well as numerous articles and columns on foreign policy.[2]