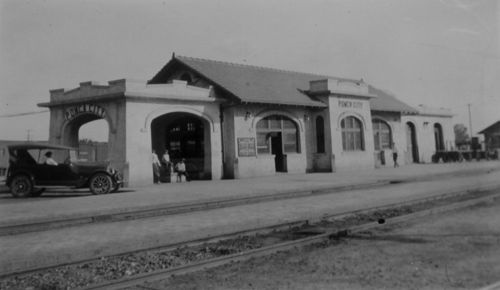 The Santa Fe Train Station in Ponca City. Santa Fe built their final station in 1911. This photo was probably taken between 1911 and 1920. 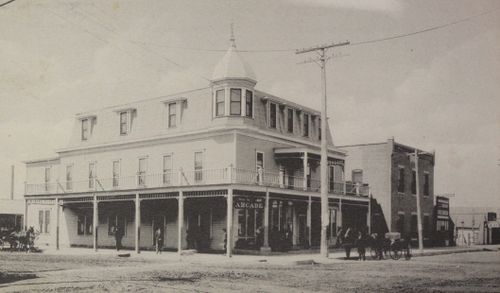 An article appeared in the Ponca City News on August 12, 2015 about the old Rock Island Railroad depot in Ponca City that has brought back many fond memories and inspired me to do some research and write an article on the role that railroads have played in the history and development of Ponca City. According to the article by Louise Abercrombie, the old Rock Island Railroad depot at 702 South 3rd Street, closed for many years, is undergoing renovation by Joan and John Shotton and will soon reopen as an art gallery that will include paintings, furniture, pottery, and hand made jerewlry.[2]

My family is a railroad family and our history in Ponca City goes back to the 1940s when my father, Dale Pickens, came to Ponca City as a telegrapher for the Rock Island Railroad after his service in the Merchant Marines in World War Two. My mother Deloris Pickens, still alive and active at 88 years of age, was also a railroad employee but at the Santa Fe Railroad at their passenger depot on Oklahoma Street next to the old Robin Hood Flour Elevator. That's how my mother and father met. My father would bring Rock Island waybills to the Santa Fe station whenever a railroad car was being transferred from the Rock Island line over to Santa Fe. Back in the 1940s, jobs on the railroad were the best jobs in the country and much sought after. The pay was excellent, the benefits were good (Mother and Father both had a free pass to ride the railroads free anywhere in the country.) and the workers had a strong union that protected the workers' rights.

Things were a lot different in Ponca City in those days. Railroad were the primary means of transportation. There was no I-35. The only way to travel long distances out of Ponca City was by passenger train. In the 1940s and 1950s, there was a passenger train stopping in Ponca City every hour around the clock. If you want to go to Oklahoma City to do some shopping, you just went down to the Santa Fe depot, bought a ticket at the ticket counter, sat down in the waiting room, and hopped onto the next train b going south. An hour or so later you were in Oklahoma City, could do your shopping, and be back in Ponca city later on in the afternoon.

We tend to think that things just get better with "progress" and that the past could only be worse than our present modern day age. But my mother tells me how local businessman could come down to the Santa Fe Depot at 5 or 6 in the afternoon, get on a train bound North, and after a restful night's sleep in a sleeper berth, wake up in Chicago. You could spend all day in Chicago doing your business or shopping, get on another train headed south and wake up the next morning back in Ponca City. It seems to me the old ways were a lot more convenient than what we put up with now, driving to Tulsa, Oklahoma City, or Wichita, waiting in line to go through security, getting stuffed into an airplane, and having to rent a car on your arrival.

My Life on the Railroad

The railroads played a huge role in my life as well. I put myself through college working on the railroads during the summer. By the late 1960s when I went to work for the Rock Island railroad, a lot of the old timers had retired and there was a shortage of station agents for the smaller railroad depots around the country. In 1967 for 12 weeks I drove down to Rock Island Regional Headquarters at El Reno, Oklahoma every Saturday and spent eight hours learning how to write waybills, fill our the famous "602" report, and put together a train. But the hardest thing I had to do was write Train Orders. Back in the days before the widespread use of long-distance telephone and train track automation, it was hard to keep track of trains. If one train was delayed or broke down, a method had to be devised to coordinate all the other trains up and down the line to keep them from running into each other

The solution was "Train Orders." According to Wikipedia:

Train order operation, or more accurately timetable and train order operation, is a largely obsolete system by which the railroads of North America conveyed operating instructions before the days of centralized traffic control, direct traffic control, and the use of track warrants conveyed by radio. The system used a set of rules when direct communication between train dispatchers and trains was limited or non-existent. Trains would follow a predetermined operating plan, known as the timetable, unless superseded by train orders conveyed to the train from the dispatcher, through local intermediaries. Train order operation was a system that required minimum human overhead in an era before widespread use of technology-based automation. It was the most practical way for railroads with limited capital resources, or lines with limited traffic, to operate.[3]

What it meant in practice was that stations agents and operators at each railraod station had to know how to write Train Orders and give them to the engineers on the trains whenever there was any change to the timetable. Learning to write Train Orders was like learning to speak in a new language. Only certain words were allowed in Train Orders the words had a very specifical meaning and could only be used in certain ways to completely eliminate any possibility of ambiguity in the meaning of the orders. The train and engine crews addressed by the order were required to observe the instructions provided in the train order, the details of which were provided by the railroad's operating rule book. Here is a sample of a train order from 1944.

Anyway by the end of the course, I was given a test and upon passing became a "certified station operator" and was qualified to run small railroad station. In those days, the Rock Island Line ran from Enid to Ponca City and a train ran once a day. Between Enid and Ponca City, thee were three Rock Island train stations in Garber, Billings, and Tonkawa. I ran both the Garber Station and the Billings Station for several weeks each summer while the regular station agent went on vacation. Usually I ran the station during wheat harvest so I was pretty busy writing up waybills for the railroad cars that were filled up with grain. I was called out of bed in the middle of the night on more than one occassion and had to drive over to Garber of Billings on a weekend during harvest when they needed some waybills written up so they could run a special train to pick up the grain that was headed to market. Towns and cities where I was Station Manager during my summers on the railroad included Enid, Garber, Billings, Alva, Elbing (Kansas), Peabody (Kansas) and Ponca City.

Santa Fe and the Birth of Ponca City

Santa Fe built their final station in 1911 and the depot was extensively remodeled in 1945 with a stucco exterior. Amtrak used this station for their Texas Chief and Lone Star passenger trains. The Texas Chief operated between Chicago and Houston, starting on May 1, 1971. It was replaced by the Lone Star, which ran until cancellation on October 8, 1979. By the year 2000 the building was boarded up and unused. The Ponca City Landmark Conservancy is negotiating to acquire the depot and restore it.[4]

The End of an Era

One of my proudest day was when I was chosen to work as a Station Operator in Ponca City on my father's job. By the time I went to work for the railroad, my father had been with Rock Island for 25 years and had four weeks vacation coming to him. His job was one of the most difficult in the Oklahoma Region. At that time there were about half a dozen Rock Island Employees in Ponca City. There was a station agent, Mr. Chadwick, who ran the office at the Rock Island depot on South 3rd Street. The Rock Island station in Ponca City was pretty busy sending out anywhere from 30 to 80 tank cars every night from the Conoco Refinery to Enid so Chadwick had two clerks who worked for him during the day filling out waybills for all those cars. There were two switchman who put together the train every night - actually switching the cars from the different sidings to put them into the right order.

Then there was my father. My father was the station operator. Every night he went to work at 8 pm and got off at 4 am. First he would stop by the Station Depot on South 3rd and pick up the waybills. Then he would drive out to the "yard office." The Rock Island train tracks came into the Conoco Refinery on the East side and all the Rock Island switching tracks and the yard office were just off Waverly about half a mile south of Highway 60. If you drive our on Waverly even today and know where to look you can still see where the train tracks used to be before they were taken up. If you really know what you are looking for you can see a telephone pole that's inside the refinery fence now that has a Yagi radio antenna on it. That's the antenna that my father used to communicate with the Railroad Station in Enid before the days of cheap and reliable long distance telephone service.

My father would get to the year office and start putting the train together. He would figure out where the cars were, what was in them, what tracks they were on, and how to arrange them and make up the reports and orders to send them on to Enid. At the same time, a Switch Engine was leaving Enid with emprty tank cars at about 8pm with an engineer, a brakeman, and a conductor. The tracks between Enid and Ponca City weren't certified for high speed rail, s the train would arrive in Ponca City between midnight and 1 pm and spend a couple of hours with the switch men leaving the empty cars and putting together a train with tank cars full of Conoco oil bound for Enid.

When I graduated from the "Academy" in El Reno as a fledgling station operator, they told me and the other twenty boys who passed the final exam that we would be working in small stations like Billing, Oklahoma or Elbin, Kansas (population 299) where were would seen a couple of cars a day and probably never write a train order. We were never expected to have to run one of the main railroad hubs like El Reno, Enid, or Ponca City. But my father vouched for me. He taught me how to do what he did and I was able to successfully perform as station operator in Ponca City and get 80 car trains out from Ponca City bound for the main line. I was 17 years old. I received a lot of help from the clerks, switchmen, engineers, conductors, and breakeman. Working for the railroad in those days was like being part of family. Everybody knew everybody else and helped each other up and down the line.