January 21, 1980: 34 Injured in Explosion at Phillips Refinery in Phillips Texas

The Pittsburg Post-Gazette reported on January 21, 1980 that explosions rocked Borger Refinery sending flames 300 feet into the air and damaging dozens of nearby homes and forcing 200 persons to flee the area. At least 34 persons were injured in the explosions which heavily damaged houses in the nearby community of Phillips and shattered windows 4 miles away in Borger. "There was a big tremble and a roar; it was more like an earthquake,"said Ada Westbrook. "All the stuff on the walls just shot right off and landed on the floor. We opened the door and saw a big ball of fire and black smoke. There are a lot of shook people here. It's just unbelievable." Dick Robinson, a spokesman for Phillips, said 29 persons were treated at a nearby hospital for minor injuries and released. Four persons were admitted for treatment but the seriousness of their injuries was unknown. Officials said the blast roared through two cracking units used to manufacture high octane gasoline. Officials had feared the blaze would spread to a third unit before it was brought under control.[1]

Officials estimated the damage would soar to millions of dollars at the plant and in Phillips and Borger. Al Hadberg, a spokesman for the Red Cross, said most of the homes close to the plant suffered heavy damage. "Most of the wood framed houses shifted on their foundation. A lot of the garage doors were torn off and a couple of ceilings collapses." Phillips officials said debris from the explosion could be coated with an acidic substance and advised residents not to pick u any of the material that landed in their yards.[2]

February 23, 1986: Phillips Decides to Tear Down the Town 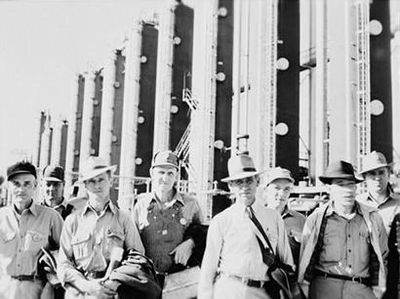 Phillips Petroleum Company created the town of Phillips, Texas in the 1920s to refine oil pumped from the Texas Panhandle, building houses for its workers, a park and the swimming pool at the school, and fixing the streets. In 1986 Phillips told the 1,500 residents of the town that it needed the land it owned under their houses and that they had until August 31 to move somewhere else.

The NY Times reported on February 23, 1986 that Phillips Petroleum Company which created the town of Phillips, Texas in the 1920s to refine oil pumped from the Texas Panhandle, building houses for its workers, a park and the swimming pool at the school, and fixing the streets, told the 1,500 residents that remain in the town that it needs the land it owns under their houses and that they have until Aug. 31 to move their homes somewhere else. "Behind the dispute lies some changed realities in the struggling oilfields of Texas, wrote Robert Reinhold. "Phillips is one of the last company towns remaining from the great boom years, and the company, which has just emerged alive but wounded from a bruising takeover fight, no longer resembles the close family enterprise started by Frank Phillips." After a powerful hydrocarbon explosion at the plant leveled the town's two churches, blew in all the windows on the north side of the school and damaged almost every house in town, the explosion prompted company officials to worry about people living so close to the huge tanks, which hold 55,000 to 100,000 barrels of refined gasoline and other products. If the refinery were being built today, houses would not be built there, said Art Austin, Phillip's spokesman at its office in Borger. Besides, he said, Phillips needs the 140 acres for possible expansion, although it has made no specific plans yet.[3]

The hydrocarbon explosion at Phillips refinery in Phillips, Texas in 1980 obliterated part of the industrial area and some nearby homes with damage estimated in the millions of dollars. The town was permanently evacuated at the request of Phillips 66 Oil Company in 1987. The homes themselves were owned but the land they sat upon was property of two local ranchers who leased the land originally to the Oil Company and later to the home owners. After the explosion, the Oil Company purchased the land from the ranches and forced the homeowners to move. Most would say the real reason the plant wanted the homeowners out of the area was not based on safety, but the fact the oil company was paying close to a million dollars a year in school taxes and wanted the school closed. Therefore, many homes were moved to areas nearby (Borger, Stinnett, , and Fritch, Texas|). The homes that were not moved were leveled.[4]

"Phillips 66 oil company made everyone move after that big explosion," wrote one former resident. "There is nothing there but the old high school and the refinery. The churches were leveled, the homes that were not moved out were leveled. It was one of the most tragic stories of small town life being overtaken by business. People lost everything. No one has a hometown to go back to....it's all leveled and you can't even drive in to look at your old school....armed security guards come after you."