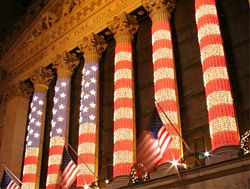 Complex Sysems like this one on Wall Street contain many niches. The Amazon Rain Forest is another complex ecology with many niches. However, the form that niches (ecological or financial) are occupied is not predetermined and efforts to explain what may be random events with narrative is part of the Narrative Fallacy. Photo: zoonabar / Chris Brown.