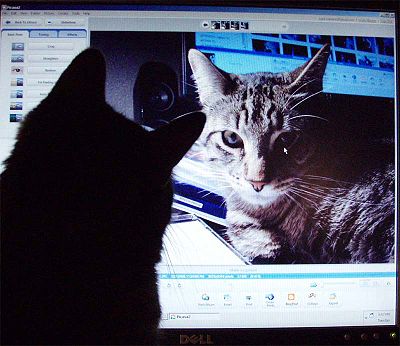 On November 21, 2008 IBM announced that it plans to build the first "Cognitive Computer" that will contain electronic circuits that mimic brain cells.[1]

Over six decades, modern electronics has evolved through a series of major developments (e.g., transistors, integrated circuits, memories, microprocessors) leading to the programmable electronic machines that are ubiquitous today. Owing both to limitations in hardware and architecture, these machines are of limited utility in complex, real-world environments, which demand an intelligence that has not yet been captured in an algorithmic-computational paradigm. As compared to biological systems for example, today’s programmable machines are less efficient by a factor of one million to one billion in complex, real-world environments. The SyNAPSE program seeks to break the programmable machine paradigm and define a new path forward for creating useful, intelligent machines.[3]

The vision for the DARPA SyNAPSE program is the enabling of electronic neuromorphic machine technology that is scalable to biological levels. Programmable machines are limited not only by their computational capacity, but also by an architecture requiring (human-derived) algorithms to both describe and process information from their environment. In contrast, biological neural systems (e.g., brains) autonomously process information in complex environments by automatically learning relevant and probabilistically stable features and associations. Since real world systems are always many body problems with infinite combinatorial complexity, neuromorphic electronic machines would be preferable in a host of applications—but useful and practical implementations do not yet exist.[3]

The key to achieving the vision of the SyNAPSE program will be an unprecedented multidisciplinary approach that can coordinate aggressive technology development activities in the following areas: 1) hardware; 2) architecture; 3) simulation; and 4) environment.[3]

Architectures will support critical structures and functions observed in biological systems such as connectivity, hierarchical organization, core component circuitry, competitive self-organization, and modulatory/reinforcement systems. As in biological systems, processing will necessarily be maximally distributed, nonlinear, and inherently noise- and defect-tolerant.[3]

Large scale digital simulations of circuits and systems will be used to prove component and whole system functionality and to inform overall system development in advance of neuromorphic hardware implementation.[3]

Environments will be evolving, virtual platforms for the training, evaluation and benchmarking of intelligent machines in various aspects of perception, cognition, and response.[3]

The research project from US defense agency Darpa will have an initial value of $4.9 million.[1]

IBM will team with five universities on the project.[1]

The cognitive computer could potentially be used for "large-scale data analysis, decision making or [] image recognition.[1]

"The mind has an amazing ability to integrate ambiguous information across the senses, and it can effortlessly create the categories of time, space, object, and interrelationship from the sensory data," says Dharmendra Modha, the lead IBM scientist on the project.[1] The ultimate goal of the project is to create a computer with the same complexity as a cat[1] "even a computer with the ability of a rat brain would be a success," said Modha.[2]

"The key idea of cognitive computing is to engineer mind-like intelligent machines by reverse engineering the structure, dynamics, function and behaviour of the brain," says Modha.[1]

The problem is not in developing a neural network which is already well understood. The problem is in developing the connections between the neurons - the synapses.[1] Synaptic connections "form, break, and are strengthened or weakened depending on the signals that pass through them" between the neurons.[1] "The brain is much less a neural network than a synaptic network," Modha says.[1]

"The issue with neural networks and artificial intelligence is that they seek to engineer limited cognitive functionalities one at a time. They start with an objective and devise an algorithm to achieve it," Modha says.[1] "We are attempting a 180 degree shift in perspective: seeking an algorithm first, problems second. We are investigating core micro- and macro-circuits of the brain that can be used for a wide variety of functionalities."[1]