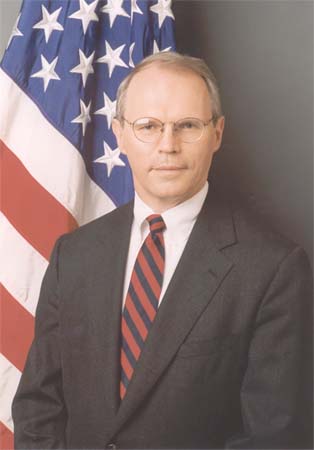 Caption: US State Department Photo of Chris Hill. Public Domain because of creation by US Government Agency.[1]

Christopher R.Hill was sworn in as Assistant Secretary of State for East Asian and Pacific Affairs on April 8, 2005.[2]

Ambassador Hill is a career member of the Senior Foreign Service whose most recent assignment was as Ambassador to the Republic of Korea.[2] On February 14, 2005, he was named as the Head of the U.S.delegation to the Six-Party Talks on the North Korean nuclear issue.[2] Previously he has served as U.S.Ambassador to Poland (2000-2004), Ambassador to the Republic of Macedonia (1996-1999) and Special Envoy to Kosovo (1998-1999).[2] He also served as Special Assistant to the President and Senior Director for Southeast European Affairs in the National Security Council.[2]

Earlier in his Foreign Service career, Hill served tours in Belgrade, Warsaw, Seoul, and Tirana, and on the Department of State's Policy Planning staff and in the Department’s Operation Center.[2] While on a fellowship with the American Political Science Association he served as a staff member for Congressman Stephen Solarz working on Eastern European issues.[2] He also served as the Department of State's Senior Country Officer for Poland.[2] Ambassador Hill received the State Department’s Distinguished Service Award for his contributions as a member of the U.S.[2]negotiating team in the Bosnia peace settlement, and was a recipient of the Robert S.Frasure Award for Peace Negotiations for his work on the Kosovo crisis.[2] Prior to joining the Foreign Service, Ambassador Hill served as a Peace Corps volunteer in Cameroon.[2]

Ambassador Hill graduated from Bowdoin College in Brunswick, Maine with a B.A.in Economics.[2] Hillreceived a Master's degree from the Naval War College in 1994.[2] He speaks Polish, Serbo-Croatian, and Macedonian.[2]

On February 6, 2009 the World Tribune reported that President Barack Obama, in what was seen as a key message to Iran, intervened at the last minute to nominate Hill as his personal choice as U.S. ambassador to Iraq.[3] Government sources said Obama blocked the appointment of former U.S. Central Command chief [Ret.] Gen. Anthony Zinni as the next U.S. ambassador to Iraq.[3] Instead, Obama, overruling Secretary of State Hillary Clinton, selected outgoing Assistant Secretary Christopher Hill as ambassador to Baghdad.[3] "Hill will be authorized by Obama to win Iranian cooperation for the U.S. withdrawal from both Iraq and Afghanistan," said one source.[3] "The president sees Iran as the key to any smooth withdrawal."[3]

On February 14, 2009 VOA News reported that news outlets in the United States are reporting that Christopher Hill, the lead American negotiator on North Korea, is expected to be nominated as the next U.S. ambassador to Iraq but that there had been no official confirmation of the reports Monday on CBS, ABC, the Associated Press and Reuters, which quote unnamed officials who say Hill is expected to be the nominee.[4]

On February 28, 2009 AFP reported that Christopher Hill has been named as the new ambassador to Iraq by US President Barack Obama.[5] n announcing his appointment, Obama said "Ambassador Hill has been tested, and he has shown the pragmatism and skill that we need right now."[5] Hill is considered a protege of Richard Holbrooke, now the Obama administration's envoy for Pakistan and Afghanistan who is best known for brokering the Dayton Peace Accords.[5]

On March 13, 2009 Associated Press reported that Republican Senators McCain, Brownback, and Graham oppose Christopher Hill as Ambassador to Iraq.[6] All three senators cited a lack of experience in the Middle East to explain their opposition to Hill.[6] Brownback also referred to his "evasive and unprofessional" past dealings with Congress, while McCain and Graham referred to his "controversial legacy" in a joint statement.[6] "The U.S. embassy in Baghdad is the world's largest, and our next ambassador will take the helm at a particularly critical time in our efforts in Iraq," Graham and McCain wrote.[6] "The next ambassador should have experience in the Middle East and in working closely with the U.S. military in counterinsurgency or counterterrorism operations. Mr. Hill has neither."[6]

The Associated Press reported on April 1, 2009 that the Obama administration had hoped the Senate would vote on Christopher Hill's nomination to the critical post this week along with several other ambassadorial appointments, but three aides familiar with the matter said it was now unlikely action on Hill would occur before the Senate goes into recess Friday.[7]

The Associated Press reported on April 1, 2009 that one congressional aide said Brownback had in fact placed a hold on Hill but the senator was expected to lift it after negotiations with the Obama administration and Senate leaders in which they agreed to hold four hours of debate on the nomination and then a vote in which Hill was expected to be overwhelmingly approved.[7]

The Associated Press reported on April 3, 2009 that Hill's was held up by Republican opposition and that the Senate would take a test vote later this month on Christopher Hill's appointment as the Obama administration's ambassador to Iraq.[8]

CNN reported on April 4, 2009 that Senate won't take up the Hill nomination until after it returns from the Easter recess on April 20.[9] Senator Brownback has spoken against Hill, including in an angry speech on the floor of the Senate, for failing to include human rights issues in talks with the North Koreans.[9] "Taken all together this is an unfortunate legacy for Ambassador Hill -- broken commitments to Congress, freelancing diplomacy, disregarding human rights and giving up key leverage to the North Koreans in exchange for insubstantial gestures. Such things have harmed our national security and ignored our moral obligations, a legacy ill-suited for the next chief of missions of Iraq," Brownback said.[9]

On April 21, 2009 the NY Times reported that Hill had been confirmed as US Ambassador to Iraq "winning strong Senate support despite some Republican objections to his handling of previous talks with North Korea."[10] Hill won confirmation by a vote of 73 to 23.[10] Senator John Kerry disclosed that Hill had been acting on instructions from the Bush White House in not pursuing human rights issues in his talks with the North Koreans.[10] “The decision to leave the special envoy for human rights out of the negotiations was not made by Chris Hill,” said Kerry, who had earlier noted that Republican complaints should be aimed at the previous administration.[10]

Tenure as Ambassador to Iraq

Associated Press reported on April 24, 2009 that Hill had arrived in Baghdad and had formally presented his credentials to Iraq's Foreign Minister Hoshyar Zebari.[11]