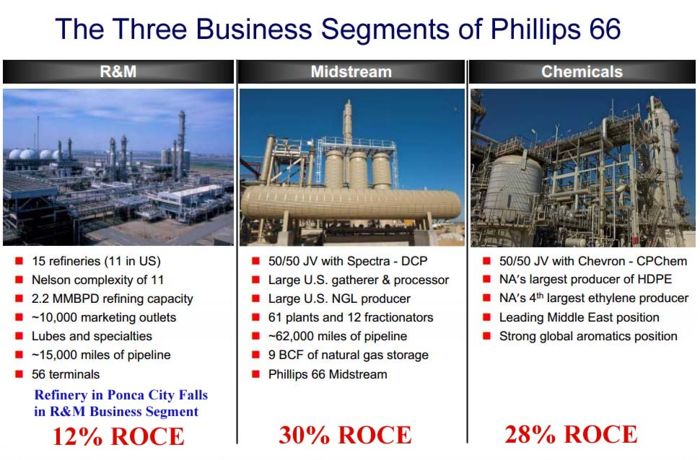 There are three leading operating segments in the new company: Chemicals, Midstream, and Refining and Marketing. The refinery in Ponca City falls in the Refining and Marketing Business Segment (R&M) which in 2011 had a much lower ROCE (Return on Capital Employed) than the other two Phillips 66 business segments. ROCE is a ratio used in finance, valuation, and accounting that compares earnings with capital invested in the company is used to prove the value the business gains from its assets and liabilities. Derivative Photo: Hugh Pickens 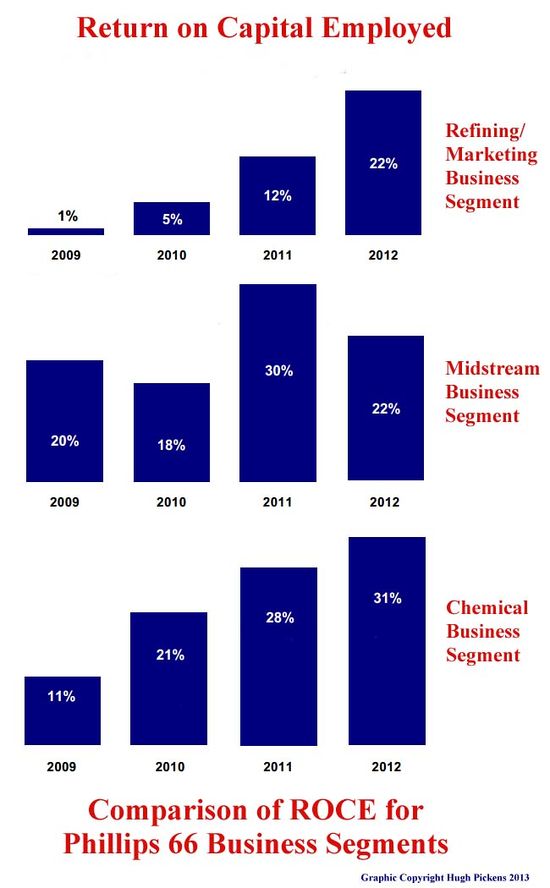 Greg Garland told analysts at the 4th quarter earnings conference on January 30, 2013 that he expects a 15% ROCE in the R&M Business Segment going forward. "My view is that, refining historically has been kind of a 10% to 12% business," said Garland. "We think we have plans in place to advantage crude capture, yields, cost reduction, that we can move it 400 basis points. So it’s a 15% business going forward for us versus a 30% return business in Chemicals. And probably Midstream business 15% to 17% returns is kind of what we’re looking in fact. So, to the extent that we have 30% and 40% return projects in refining, we’re going to do those. I think, I mean we do get challenged by people all the time or we under investing in refining. At this point, we don’t think so. I don’t think there’s any opportunities out there, we feel that we’ve missed in terms of an investment opportunity in the refining space. Our focus is going to be very disciplined. We’re going to restrict capital in this space. We’re going to improve returns in this space. And so we don’t see a change required in our strategy at this point in time."[1] Derivative Photo: Hugh Pickens 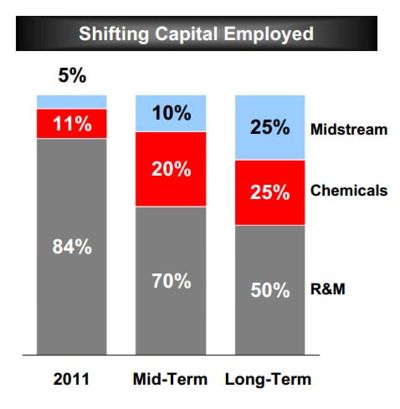 In 2011 about 84% of Phillips 66 capital was allocated to Refinery and Marketing with 11% allocated to Chemicals and 5% to Midstream. Phillips 66 plans a major change in this allocation. "Long-term we have a vision that about 50% of our capital employed will be directed towards the R&M segment. And the other 50% will be directed towards Midstream and Chemicals." Derivative Photo: Hugh Pickens

On April 9, 2012, Greg Garland, the designated CEO of Phillips 66, presented an overview of the new company and his plans for Phillips 66. There are three leading operating segments in the new company: Chemicals, Midstream, and Refining and Marketing.[2][3][4]

Benefits of Being an Independent Company

Garland talked about the benefits of Phillips 66 being an independent company. "As I think about the spin and really the strategy and the rationale behind the spin, it creates opportunity for Phillips 66 to create value that we just couldn't pursue as part of the integrated ConocoPhillips. Our existing R&M business, our Chemicals and Midstream business, all provide good, solid cash flow and we can use this cash flow to fund strategic growth. We can use it to improve returns, and also for distributions to shareholders. I think another benefit of the spin is you will see greater granularity regarding asset performance and the financial results in all three segments."[5][6][7]

Simon Moore wrote at Seeking Alpha on May 10, 2012 that ConocoPhillips was a slower, more lumbering entity but with Phillips 66 newly reduced size, its growth should accelerate.[8]

The Houston Business Journal reported on August 10, 2012 in a profile of Chevron Phillips CEO Pete Cella that with the ConocoPhillips split of its upstream and downstream business in May, Chevron Phillips makes up a more prominent part of the Phillips 66 business, which is good because the company gets more attention, said Cella.[9]

Laurie Winslow reported in the Tulsa World on October 3, 2012 that with Phillips 66 up 40.3 percent in the five months since its divestiture on May 1, 2012, the market has applauded the move by ConocoPhillips to split its exploration and production company from its refining business, creating Phillips 66. "In past years, refiners have been the dogs of the energy sector, and in 2012 they find themselves the darling of the energy sector. Phillips 66 really has spread its wings since the spinoff from ConocoPhillips, and it's gotten quite a bit of international attention," says Jake Dollarhide, CEO of Longbow Asset Management Co. "A lot of people felt that ConocoPhillips with all of the businesses together wasn't getting the market valuation it deserved."[10]

Greg Garland told investors and securities analysts at the 2012 Barclays CEO Energy-Power Conference in New York on September 5, 2012 that a differentiated portfolio is a competitive advantage for Phillips. "I would just say over the last 3.5 years, about 40% of our adjusted earnings came out of R&M or specifically refining. Then you can see 60% came out of marketing specialties and other businesses, our Chemicals business and Midstream business. The point here, we have a differentiated portfolio. We like this portfolio. We think it's a competitive advantage for us."[12]

"Here's how we plan to enhance returns on capital," says Garland in the April9, 2012 financial analysts meeting. "I think you will see continued portfolio optimization, margin improvement from us. We will drive our capital employed to higher returning businesses. You can see on the chart on the right in 2012 we plan to high grade, to move more investment to Chemicals and Midstream. And by the way, these are our equity share of the investments in Chemicals and Midstream. While we're pursuing aggressive growth at both the DCP Midstream and the Chemicals Midstream, our view is that they're going to be self funding and at the same time they will dividend cash back to Phillips 66."

Garland told financial analysts at an investors conference on June 5, 2012 that Phillips 66 would keep investments in its refining assets to a minimum, instead focusing on expanding its chemical-and-logistics business and that Phillips 66 will spend $2 billion on capital projects in its midstream-logistics segment, including natural-gas-liquids processing and exports infrastructure.[14]

Molly Ryan reported in the Houston Business Journal on February 11, 2014 that Phillips' decision to move forward with more than $3 billion worth of projects reflects the company’s strategic decision to chase higher-margin markets. "Midstream spending is expected to pick up in 2014 since energy companies are increasingly realizing the profits that can be found in moving the massive amount of oil and gas coming from U.S. shale plays," writes Ryan. "Phillips 66 specifically hopes to cash in on this through its new liquefied petroleum gas terminal, which will store and transport fluids, and its new fractionator facility, which will supply and transport natural gas liquid products to petrochemical companies."[15]

Plan to Aggressively Grow Chemicals and Midstream segments of Phillips 66

Garland plans to aggressively grow the Chemicals and Midstream segments of Phillips 66 and de-emphasize the Refining and Marketing segments of the company. "Over the past three years we've reduced refining capacity about 450,000 barrels a day. In our Chemicals segment we've been growing primarily through investments in the Middle East. In our Midstream segment, growth has come from expansions around the shale liquids and gas producing areas."[16][17][18] "The refining business is currently a difficult business and one where the outlook doesn't change a lot going forward," said Mark Gilman, an independent oil and gas analyst. "Phillips 66's asset quality in the refining space is, at best, kind of average."[19] The best performing divisions for Phillips 66 are expected to be its midstream joint venture and a petrochemicals company.[20]

Simon Moore wrote on Seeking Alpha on May 10, 2012 that now that Phillips 66 is no longer part of ConocoPhillips, management is planning a clear cut move to greater emphasis on Midstream and Chemicals Business Segments. "New management's long term plan is to move to 50% Refining and Marketing, 25% Chemicals, and 25% Midstream. These latter two businesses have a much higher ROCE (return on capital employed) for PSX."[21]