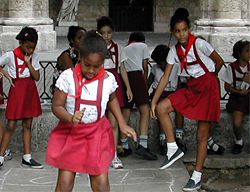 There were over 614 comments posted on this topic[1] on Slashdot.

How do we transmit a growth mind-set to our children? One way is by telling stories about achievements that result from hard work. For instance, talking about math geniuses who were more or less born that way puts students in a fixed mind-set, but descriptions of great mathematicians who fell in love with math and developed amazing skills engenders a growth mind-set, our studies have shown. People also communicate mind-sets through praise. Although many, if not most, parents believe that they should build up a child by telling him or her how brilliant and talented he or she is, our research suggests that this is misguided. We found that intelligence praise encouraged a fixed mind-set more often than did pats on the back for effort. Those congratulated for their intelligence, for example, shied away from a challenging assignment—they wanted an easy one instead—far more often than the kids applauded for their effort. (Most of those lauded for their hard work wanted the difficult problem set from which they would learn.) When we gave everyone hard problems anyway, those praised for being smart became discouraged, doubting their ability. And their scores, even on an easier problem set we gave them afterward, declined as compared with their previous results on equivalent problems. In contrast, students praised for their effort did not lose confidence when faced with the harder questions, and their performance improved markedly on the easier problems that followed.[2]

"One thing I’ve learned is that kids are exquisitely attuned to the real message, and the real message is, ‘Be smart,’" Professor Dweck said. "It’s not, ‘We love it when you struggle, or when you learn and make mistakes.’" As we get older, many of us invest a great deal in being right. When things go wrong, as they inevitably do, we focus on flagellating ourselves, blaming someone else or covering it up. Or we rationalize it by saying others make even more mistakes. What we do not want to do, most of the time, is learn from the experience.[3]

"Praising children's intelligence, far from boosting their self-esteem, encourages them to embrace self-defeating behaviors such as worrying about failure and avoiding risks," said Dr. Dweck, lead author of the study. "However, when children are taught the value of concentrating, strategizing and working hard when dealing with academic challenges, this encourages them to sustain their motivation, performance and self-esteem." Children praised for effort attributed more of their low scores to effort than did children praised for intelligence, the researchers found. Children praised for intelligence said a lack of ability was to blame.[4]