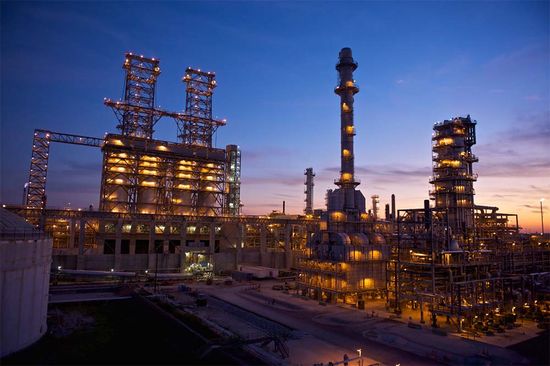 The Trainer Refinery, sold by Phillips 66 to Delta Airlines in June, 2012, is located on the Delaware River in Trainer, Pa., about 10 miles southwest of downtown Philadelphia. The refinery has a crude oil processing capacity of 185 MBD and processes mainly light, low-sulfur crude oil. Trainer receives crude oil by tanker from West and North Africa and Canada. The refinery facilities include fluid catalytic cracking, hydrodesulfurization units, a reformer and a hydrocracker that enable it to produce a high percentage of transportation fuels, such as gasoline, diesel fuel and jet fuel. Other products include home heating oil and low-sulfur fuel oil. Refined products are primarily distributed to customers in Pennsylvania, New York and New Jersey via pipeline, barge and railcar.[1] Photo by Phillips 66

The Trainer Refinery, sold by Phillips 66 to Delta Airlines in June, 2012, is located on the Delaware River in Trainer, Pa., about 10 miles southwest of downtown Philadelphia. The refinery has a crude oil processing capacity of 185 MBD and processes mainly light, low-sulfur crude oil. Trainer receives crude oil by tanker from West and North Africa and Canada. The refinery facilities include fluid catalytic cracking, hydrodesulfurization units, a reformer and a hydrocracker that enable it to produce a high percentage of transportation fuels, such as gasoline, diesel fuel and jet fuel. Other products include home heating oil and low-sulfur fuel oil. Refined products are primarily distributed to customers in Pennsylvania, New York and New Jersey via pipeline, barge and railcar.[2]

News and Views on Trainer Refinery

Reuters reported on July 6, 2016 that Delta Airlines cut production by 11 percent at its 185,000 bpd Trainer Refinery , a source told Reuters on Tuesday, citing economic and operational reasons. "The fundamental weakness in gasoline markets is being exemplified by the RBOB crack spread, which is closing in on levels which would encourage refiners to dial back on runs," said Matt Smith, analyst at New York-based oil cargo tracker Clipperdata.[3]

February 9, 2015: Forbes Says Delta Made a Mistake Buying the Trainer Refinery from Phillips 66

Christopher Helman wrote in Forbes Magazine on February 9, 2015 that two-and-a-half years after Delta Airlines decision to buy the Trainer Refinery from Phillips 66 Delta has sunk $420 million of capital into the refinery, which has generated roughly $100 million of losses. "This deal is even more idiotic now than it was then,” says Ed Hirs. Buying a refinery just isn’t a big hedge against fuel prices because the real cost of fuel is the oil, not the refining. “It’s as wrongheaded as buying a bakery to hedge against rising bread prices,” says Hirs. “If you really want to hedge your bread price, then buy a wheat field. Likewise, if these guys want to hedge fuel prices what they should buy are oilfields–which are on sale right now.” Delta would have been better off just waiting for oil prices to fall and then locking in lower fuel prices in the futures market. Instead it’s stuck with an expensive albatross.

Delta still tries to put a good face on Trainer. After sinking some $40 million more into the plant in 2014, Delta said in a December presentation that Trainer was profitable in the fourth quarter because fuel prices did not fall quite as fast as crude oil.[4]

The Philadelphia Inquirer reported on January 23, 2013 that Phillips 66 Co. has agreed to pay a $50,000 penalty to settle alleged violations of hazardous waste regulations at its former refinery in Trainer. The U.S. Environmental Protection Agency cited Phillips 66 for violations involving the storage of hazardous materials including refinery hydrocarbon waste, chromium waste, heavy metal waste from batteries and mercury waste from fluorescent bulbs.[5]

CBS Moneywatch reported on June 22, 2012 that Delta Airlines had completed its $180 million purchase of Phillips' Trainer Refinery and the refinery is expected to restart in September, according to filings made with Pennsylvania utility regulators by the Delta subsidiary that will run it, Monroe Energy LLC. Delta said the refinery will hire back about 400 people.[6]

June 13, 2012: Delta Airlines Set to Close its Landmark Deal on June 22 to buy the Trainer Refinery

Reuters reported on June 13, 2012 that Delta Airlines is set to close its deal to buy Phillips 66's Trainer Refinery on June 22, allowing Delta to begin a long-delayed maintenance overhaul in early July. A plant-wide turnaround lasting 40 to 50 days is expected to begin after July 4, allowing the idled plant to resume producing fuel. The major maintenance, which is required every five years, was originally due in the spring of 2011, but had been deferred until the plant was shut later that year. Delta expects to reconfigure parts of the refinery to maximizes jet fuel production. About 175 out of the 220 hourly workers are expected to return to the plant, with the remainder either retiring, transferring or getting other employment.[7]

May 15, 2012: Did Delta Make a Mistake Buying the Trainer Refinery from Phillips 66?

Greory J. Millman wrote in the Wall Street Journal on May 15, 2012 that Delta's out-of-pocket investment to acquire the Trainer Refinery is $150 million, and it plans to spend another $ 100 million to maximize jet fuel production there. "There are three problems here. First, Delta will not manage the capital invested in the refinery for optimal return. Second, even if Delta were to do so, the refinery is one of the least economical in the U.S. so its potential returns are low at best. Third, the refinery will probably require much more capital than Delta's public presentations suggest." It's easy to see why ConocoPhillips (COP) shut Trainer down adds Millman. "The Trainer Refinery was not producing net income," said ConocoPhillips Chief Financial Officer Jeff Sheets during the company's third-quarter earnings call in 2011. "The cash generation was also not very strong. We were at a point where we were having to decide about timing on turnaround costs and future capital expenditures, which had a lot to do with the timing of the decision to shut it down in October." Once shareholders see the consequences of this deal unfold, they'll demand that Delta divest the refinery operations and redeploy the capital in more productive investments concludes Millman.[8]

Phillips 66 issued a press release on May 1, 2012 announcing that Phillips 66 and Monroe Energy LLC have signed a purchase and sales agreement for Monroe Energy LLC, a subsidiary of Delta Air Lines, to purchase the Trainer Refinery and associated terminal and pipeline assets for $180 million. The purchase price does not include the value of existing inventories. The transaction is expected to close in the first half of 2012. Phillips 66 also has entered into multi-year agreements with Monroe to supply jet fuel to Monroe in other regions of the country while Phillips 66 will purchase gasoline and other refined products from Monroe at the Trainer Refinery and local terminals.[9]

Critics of Delta's purchase of the refinery have questioned the wisdom of Delta trying to run a refinery in the Northeast. Ed Hirs, a professor of energy economics at the University of Houston, said hedging fuel costs through options can accomplish very much the same agenda without being exposed to the risks of owning a refinery.[10]

Reuters reported on April 9, 2012 that Phillips 66 continue to shore up its refining portfolio and has two refineries up for sale - Trainer and Alliance in Louisiana. Sources familiar with the sales process said Delta Airlines is considering a bid for the Trainer refinery, idled at the end of September 2011, and is in "very critical" negotiations with ConocoPhillips. Reuters also reports that there may be other actions affecting its portfolio.[11]

Andrew Maykuth wrote in the Philadelphia Inquirer that a bid by Delta Airlines to buy the idled Phillips 66 refinery in Trainer to satisfy its enormous thirst for jet fuel appears to be gaining momentum. "Sources close to negotiations believe that Delta Air Lines has emerged as the clear favorite for the idle plant," says Tom Kloza, publisher of Oil Price Information Service. "The action certainly implies that the Trainer refinery will be restarted in the second half of 2012, and perhaps as early as July or August." Delta's interest in buying a business that an experienced oil company wants to jettison has raised eyebrows among some analysts, who believe that the airline has other means available to protect itself from fuel-price fluctuations without investing in manufacturing. "At one level it makes sense to better manage supply," said James Balaschak, a principal with Deloitte Consulting L.L.P. in Philadelphia. "On the other hand it is outside their core business. There are alternative strategies such a hedging which can be as effective."[12]

The Phiadelphia Inquirer reported on April 17, 2012 that US Senator Bob Casey Jr. (D., Pa.) and the Delaware County Council had urged ConocoPhillips to sell its refinery in Trainer to a buyer that would keep the refinery operating as a manufacturing facility rather than turn it into a fuel storage terminal and wrote to ConocoPhillips chief executive James Mulva to urge him to sell the plant to buyer that would operate it as a refinery, which would employ more people and require more investment than a fuel-storage facility.[13]