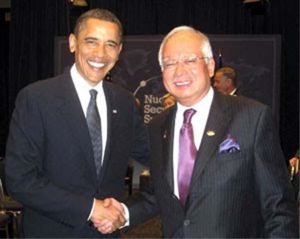 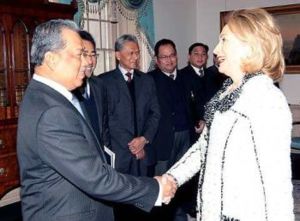 Deputy Prime Minister Tan Sri Muhyiddin after a meeting with US Secretary of State, Hillary Clinton. 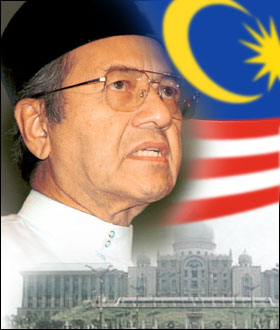 Former Prime Minister of Malaysia Mahathir Mohamad, who said in 2002 the United States had become “ugly” and criticized its aid policy.

Here’s a story that has yet to be released to the press that you won’t find on the Peace Corps web site. According to the Malaysia Star and the Hawaii based Star-Advisor, the Peace Corps plans to reinstate its program in Malaysia after a thirty year lapse and the first volunteers heading to Malaysia will begin training in Hawaii on March 1, the fiftieth anniversary of the executive order founding the Peace Corps. Here’s how it all came about.

Last September, President Barack Obama attended the second Asean-United States conference in New York City and was trying to think of an immediate initiative that could be undertaken by the United States to foster close relations with Southeast Asian nations, when he turned towards Datuk Seri Najib Tun Razak, the Prime Minister of Malaysia. Najib promptly proposed that Peace Corps program which ran from 1961 to 1981 in Malaysia be revived with a focus on teaching English. “I said that there was a chance now to revive the American Peace Corps program, but specifically to teach English,” said Najib.[1] “President Obama had given a positive response, saying that personally, he understood the matter as his mother had been an English teacher (in Indonesia). He had a deep personal experience and he seemed to welcome the idea.” Najib added that Malaysia was prepared to partly sponsor the program of bringing in qualified teachers to teach English.

hillarymalaysiaNow according to a story in the Malaysia Star from mid-January, the US government has agreed to Malaysia’s proposal to revive its Peace Corps program and will send their teachers over once a mechanism has been worked out. The move, in the wake of improved relations between both countries, will help alleviate the shortage of English teachers in Malaysia and improve proficiency of the language. “If possible, we want to start (the program) this year,” said Deputy Prime Minister Tan Sri Muhyiddin after a meeting with US Secretary of State, Hillary Clinton in Washington.[2]

Training to Take Place in Hawaii

The Star Advisor, a newspaper in Hawaii, reported on February 6, 2010 that a group of 65 trainees is expected in Hawaii March 1 for training for Malaysia. The report in the Star Advisor added that the University of Hawaii’s Peace Corps training program in Hilo will be cut back because of reduced numbers of trainees, said university President Thomas H. Hamilton. Sources in Washington said that Peace Corps headquarters in Washington had complaints about administration of the program, and that changes in staffing were to take place as a result. However Hamilton denied that any shakeup in administration of the training program is under way. “We’ve been negotiating various things with the Peace Corps, but that’s not it,” said Hamilton.[3]

Criticism of Program in Malaysia

Not everyone is pleased with the return of the Peace Corps to Malaysia. On January 25, Dr. Mana wrote in the Malaysia Kini that to get foreign lecturers to help improve the standard of English among students may not the best option for the Ministry of Education. “It was no doubt cheap to employ teachers under the US Peace Corps program at one time as these volunteers were only given a living allowance while serving in the country but they were well rewarded by the US government after their voluntary stint overseas,” writes Dr. Mana. “The vast culture gap between Malaysian students and foreigners would only further inhibit our students from learning the language. The Ministry’s plan to further buttress the learning of English in schools is apt indeed. It’s however more sensible to emphasise on this at the primary school level. The six years of primary education should see students have a reasonable grasp of the language.”[4]

Turnaround of Attitude of Malaysian Government

mahathir1This is quite a turn around for the government of Malaysia. In 2002, then Prime Minister Mahathir Mohamad, due to pay a rare visit to the White House said the United States had become “ugly” and criticized its aid policy. “At one time the United States was the most popular country in the world because of the Peace Corps. Now there is no Peace Corps and no aid except when tied to the fulfillment of the policies of the donor,” Mahathir told a gathering of U.S. and Asian business and government leaders. “America has become ugly and American embassies everywhere must be built behind high walls,” the prime minister added. President Bush had invited Mahathir, Asia’s longest-serving elected leader, to visit Washington on May 12-14. Relations between Malaysia and the United States, its biggest trading partner and foreign investor, soured over the 1998 imprisonment of Mahathir’s former deputy Anwar Ibrahim, whom Washington regards as a political prisoner.[5]

Photo 3: Former Prime Minister of Malaysia Mahathir Mohamad, who said in 2002 the United States had become “ugly” and criticized its aid policy