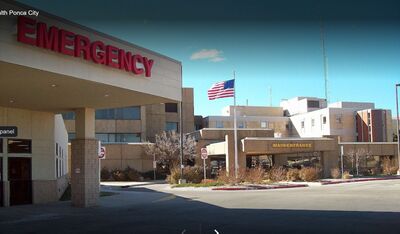 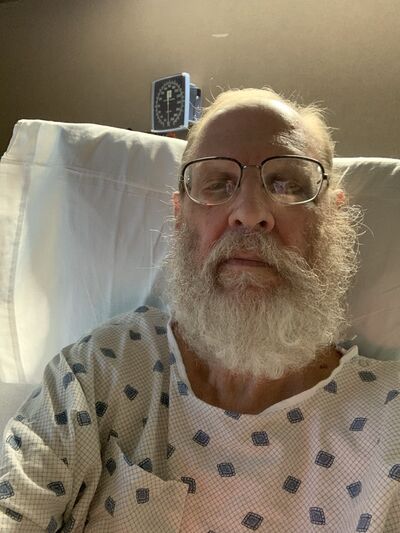 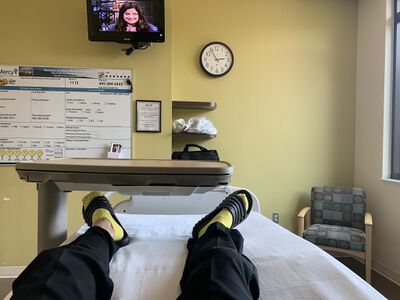 In the Rehab Facility at Mercy Hospial in Oklahoma City 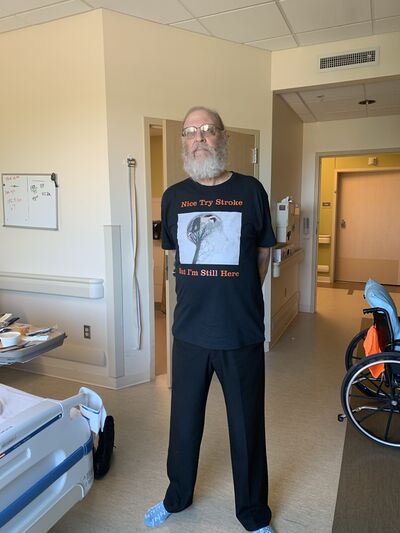 Back in November 2020 I had a moderate case of covid and wrote about my experience. On June 13, 2021 I had a massive stroke as a result of long covid that left me temporarily paralyzed on my left side. This is the story of my stroke and my recovery.

June 13 was like any other day. I had gotten up and I had just finished taking a shower, and I was walking back to the bedroom in my bathrobe. I walked into the bedroom and all of a sudden I started feeling lightheaded. I continued walking and everything seemed to happen like it was in slow motion like when you're in a traffic accident. I started to lose my peripheral vision. It was like curtains were closing across my eyes coming in from both the right and the left while my eyes remained focused straight ahead with tunnel vision. At that point I felt my left leg start to give out from under me and I started to fall and everything started to go black. I blacked out. I remember hitting some furniture on the way down, which is probably a good thing since it broke my fall and kept me from breaking any bones.

The next thing I knew I was lying on the floor in the bedroom. I was unconscious for, I'm going to say, about 10 or 15 minutes. I woke up and I tried to get up and I was unable to make my arms or legs obey me. I was laying on the floor and I could not sit up. I was trying to sit up and stand up and get into my easy chair and get to my phone so I could call for help but I could not even sit up. I could not talk or yell.

My companion happened to come in from the living room, and she saw me there and she tried to help me get up but she wasn't strong enough. At that point she got on the phone and called my best friend, Dave, who is a really big guy, and she told him what had happened, and he drove straight over. Dave and Shayla sat me up in the chair, and then Dave called 911 and got an ambulance. Dave is the first one to figure out that I had a stroke. It turns out that Dave's father had a stroke about 20 years ago, and Dave said his father was never the same after that. So Dave knew exactly what to look for. Dave also knew that there is a golden hour for strokes. The sooner you receive tretment for a stroke, the better your chance for a full recovery.

I was very fortunate because my companion, a nursing student, was here with me in the house and she found me within about 10 minutes after I had my stroke. They got me to the ER within 20 minutes of my stroke. There doctors ordered a CAT scan to determine if I had an ischemic stroke (blockage) or hemorrhagic stroke (internal bleeding) and then administered a drug by IV called TPA ( Tissue plasminogen activator) to break the clot up. (The charge for the drug was $20,000 on my Medicare statement.)

They put me on a helicopter and sent me on a half hour flight to Oklahoma City to the Stroke Center at Mercy Hospital. I vividly remember the trip as I was lying immobile on a stretcher in the back of the helicopter and felt the panic of thinking I might be permanently paralyzed as I discovered that as hard as I tried, I could not move a finger on my left hand or wiggle a toe on my left foot.

I spent three days in the ICU at Mercy Hospital and then I went to their rehab center for five days where I received physical therapy. I have made almost a 100% recovery and it was all due to the fact that they got me to the ER and administered the drug to break the clot up before too many brain cells had died. I consider myself 99% recovered. I have my movement back in my left arm and my left leg.

Long Term Effects of the Stroke

I do have a couple of long term effects of the stroke.

First I had to learn to walk again in rehab. I had drop foot and was prone to dragging my left foot behind me. Apparently I lost feeling and control in the nerves on the bottom of my foot. However it all seems to have come back and I am walking almost normally again. My brain rewired itself to get the outputs from my foot nerves. Not much is known about the specifics of how cognitive function is restored, however it appears that the signals from my foot were re-routed into healthy brain tissue and I slowly regained sensation and control over my left arm and leg. It has taken me about three months to learn to walk as confidently as before the stroke.

I also had some difficulty swallowing liquids. When you swallow there is a little flap that automatically goes down to cover your windpipe so that water does not enter your lungs. The part of my brain that controls that flap must have been affected because I could not swallow correctly. I had to be very careful because I would start to choke when I drank water and it went down my windpipe. During rehab, they taught me how to consciously force that little flap to go down and cover my windpipe and now I am all right but I have to think about it consciously every time I swallow liquids.

The other long term effect that I have is with my bladder. I still have complete bladder control. However, several times a day I felt an overpowering urgency to urinate but when I go to the bathroom I produce only a small amount of urine. Something is wrong with my bladder nerves which are sending false signals to my brain. My urologist has prescribed a medication for me, which seems to have solved the problem.

I think one of the factors in my complete recovery was that I'm in pretty good shape. I do treadmill and do free weights two or three times a week so I had a lot of strength and endurance when I had the stroke and that speeded my recovery. I have started doing treadmill and weights again but I have a noticeable lack of strength in my left arm. When I do an exercises with 25 pounds with my right arm. I have to lower it down to 20 pounds to do the same exercise with my with my left arm.

I have not noticed any memory loss of loss of cognitive ability. I am still able to balance my checkbook and create a spreadsheet without any difficulty. But who am I to judge. It reminds me of a phone interview I did a few years ago when I was taking out a large term life insurance policy. One of the questions they asked me during the interview was if I had noticed any memory loss at my age. "I don't remember having any memory loss," I answered and we both laughed.

I am sure that the key to my recovery and to my survival was the fact that I had someone with me who found me very quickly after I had my stroke and knew what to do about it. if I had been alone here in the house I am convinced that I would have died on the floor.

I'm 72 years old and I understand that the five year survival rate for someone my age who has a stroke is about 30% which is not too encouraging. However I think that my five year survival probability is going to be much higher than that because I've made such a strong recovery and I am getting myself back in shape.

The other thing to note is that I had a moderate case of COVID last November which I have written about. My doctor says that my stroke is almost certainly the result of long COVID. In one study A total of 103 (1.3%) patients developed acute ischemic stroke among 8163 patients with COVID-19. My doctor says there are reports that COVID can attack the cells on the interior of the heart causing clots to form inside the heart, One large clot apparently broke loose and went up my carotid artery and caused the blockage to my brain.

I am taking a blood thinner now called Eliquis which should prevent any further clots from forming. Hence, I think there's a low probability that I will ever have another stroke but I will be on Eliquis for the rest of my life.

Lucky to be Alive

I am lucky to be alive and I plan to use the years I have left to complete my work here on earth. Paradoxically the experience has left me more comfortable with the idea of my eventual annihilation. If I had not been found in time, I would have just died on the floor and never woken up. The experience of blacking out was not painful or unpleasant and when I have to go I hope it is with a stroke and that I just don't wake up. it is not something I fear.