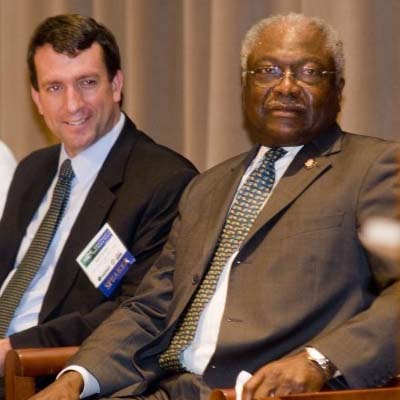 Carson (left) seated next to 6th District Congressman James E. Clyburn on stage at a summit Orangeburg, South Carolina at Orangeburg-Calhoun Technical College on August 23, 2011 with Secretary of Energy Steven Chu. In 2002 Congressman Clyburn criticized the Voter Registration Database that Carson helped develop in South Carolina that targeted African-American voters. Clyburn said party leaders ignored concerns he raised along with other black leaders that traditional methods such as yard signs, advertising in black newspapers, and neighborhood canvassing should be the focus of the campaign. "I think after 62 years on this Earth, I know a little bit about voters, particularly African-American voters," said Clyburn.