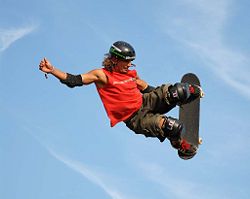 "Does time slow down when you are in a traffic accident or other life threatening crisis like Neo dodging bullets in slow-motion in The Matrix? To find out, researchers developed a perceptual chronometer where numbers flickered on the screen of a watch-like unit. The scientists adjusted the speed at which the numbers flickered until it was too fast for the subjects to see. Then subjects were put in a Suspended Catch Air Device, a controlled free-fall system in which 'divers' are dropped backwards off a platform 150 feet up and land safely in a net. Subjects were asked to read the numbers on the perceptual chronometer as they fell [video]. The bottom line: While subjects could read numbers presented at normal speeds during the free-fall, they could not read them at faster-than-normal speeds. 'We discovered that people are not like Neo in The Matrix,' Eagleman said. 'The answer to the paradox is that time estimation and memory are intertwined: the volunteers merely thought the fall took a longer time in retrospect'."[1]