Difference between revisions of "Ask Not" 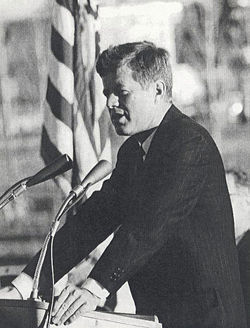 I have today signed an Executive Order providing for the establishment of a Peace Corps on a temporary pilot basis. I am also sending to Congress a message proposing authorization of a permanent Peace Corps. This Corps will be a pool of trained American men and women sent overseas by the U.S. Government or through private institutions and organizations to help foreign countries meet their urgent needs for skilled manpower.

It is our hope to have 500 or more people in the field by the end of the year.

The initial reactions to the Peace Corps proposal are convincing proof that we have, in this country, an immense reservoir of such men and women--anxious to sacrifice their energies and time and toil to the cause of world peace and human progress.

In establishing our Peace Corps we intend to make full use of the resources and talents of private institutions and groups. Universities, voluntary agencies, labor unions and industry will be asked to share in this effort--contributing diverse sources of energy and imagination--making it clear that the responsibility for peace is the responsibility of our entire society.

We will only send abroad Americans who are wanted by the host country--who have a real job to do--and who are qualified to do that job. Programs will be developed with care, and after full negotiation, in order to make sure that the Peace Corps is wanted and will contribute to the welfare of other people. Our Peace Corps is not designed as an instrument of diplomacy or propaganda or ideological conflict. It is designed to permit our people to exercise more fully their responsibilities in the great common cause of world development.

Life in the Peace Corps will not be easy. There will be no salary and allowances will be at a level sufficient only to maintain health and meet basic needs. Men and women will be expected to work and live alongside the nationals of the country in which they are stationed--doing the same work, eating the same food, talking the same language.

But if the life will not be easy, it will be rich and satisfying. For every young American who participates in the Peace Corps--who works in a foreign land--will know that he or she is sharing in the great common task of bringing to man that decent way of life which is the foundation of freedom and a condition of peace.